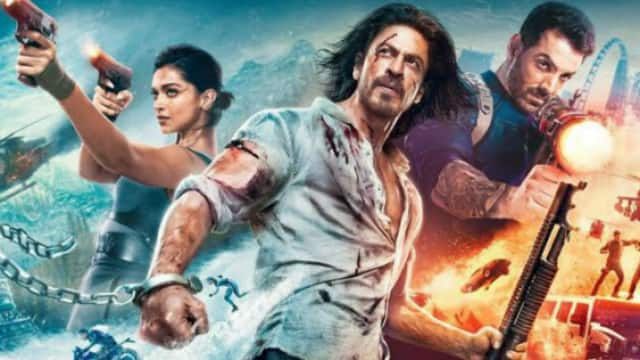 Shah Rukh Khan’s much awaited film Pathan has both his haters and fans eyeing it. From the announcement of the film till its release, it got a lot of hype. The film has received decent reviews from the audience and critics as well. Although people have also mentioned some flaws. The first day collection of the movie till 3 pm has arrived. The film has taken a good start. According to the data, Pathan is still ahead of the blockbuster film War.

see how much earned
According to a tweet by film critic and business analyst Taran Adarsh, Pathan’s first day’s update till 3 pm in National Chains went something like this.
#PVR: 9.40cr
#INOX: 7.05cr
#Cinepolis 3.90cr
Total: ₹ 20.35 cr
He called it extraordinary. Pathan is still ahead in comparison to War (19.67 crores).

Salman’s entry increased the heartbeat
Viewers are writing many interesting things related to the film on social media. Shahrukh’s fans are considering Pathan as Shahrukh’s strong comeback. At the same time, the maximum excitement is in the fans of Salman Khan. Even Shahrukh’s fans are liking Salman Khan’s entry more. Salman Khan’s entry in the film takes place in the second half. He shows his Tiger series scarf first. People are also liking its background and Shahrukh saluting Salman. People are also liking John Abraham’s role in the film. It is expected that the film will also get the benefit of the National Holiday. After January 26, its collection may increase on the weekend.