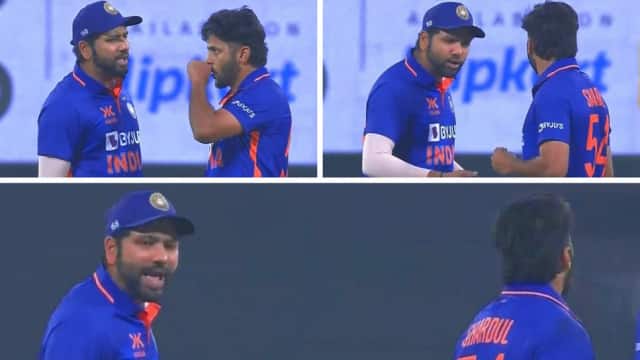 India won the last match of the three-match series against New Zealand by 90 runs to clean sweep the ODI series. Captain Rohit Sharma, Shardul Thakur along with Shubman Gill were the heroes of the victory in the last match. Shardul took wickets on such an occasion, when the match seemed to be going out of India’s grip. Shardul is considered an expert in breaking partnerships, but during this he leaks a lot of runs. Because of taking wickets on important occasions to Shardul, some people have started giving him the title of ‘Lord’. Rohit hit a century in this match and India set a target of 386 runs to win against New Zealand. The way Devon Conway was batting, it seemed that the Kiwis would not lose this match easily.

Conway and Henry Nicholls together put India under pressure, both sharing a 106-run partnership and this also increased the tension of captain Rohit Sharma. India were getting wickets, but Rohit knew that as long as Conway was at the crease, the Kiwis could turn the tide anytime. During the match, Conway hit a four off a ball from Shardul and captain Rohit did not like this at all.

IND’s ‘magician’, who turns the dice of the match with bat and ball, know

Rohit ran to Shardul and anger and frustration was clearly visible on his face. Actually Rohit was not happy with the line and length of this ball of Shardul. Now talking about Shardul Thakur’s overall performance, he hit 25 runs in 17 balls with the bat and took three wickets for 45 runs in 6 overs during bowling. Shardul took the wickets of Darrell Mitchell, Tom Latham and Glenn Phillips.