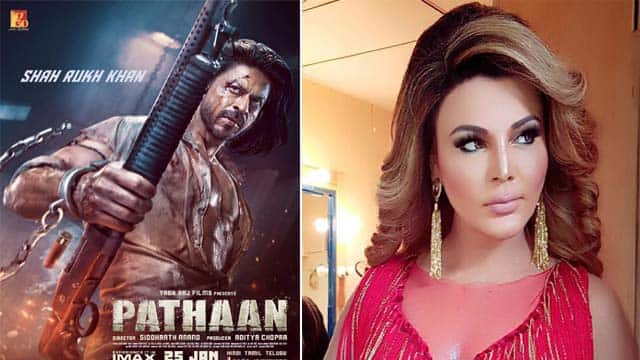 A video of actress Rakhi Sawant apologizing to Shah Rukh Khan is going viral. In this video, Rakhi is talking about Shahrukh’s film Pathan. In this video posted from Paparaji page, Rakhi is apologizing to Shahrukh. He talked about the film Pathan and also made a request to his mother. Please tell that Rakhi’s mother Jaya is currently suffering from brain tumor and is admitted in the hospital for treatment. This video is of Rakhi standing outside the hospital.

He was seen at Tata Memorial Cancer Hospital in Mumbai on Monday evening. Rakhi went there to meet her mother Rakhi spoke to the media about superstar Shah Rukh Khan’s film Pathan. In the video, Rakhi is seen apologizing to Shah Rukh for not making a dance video for the new song in her upcoming film. Rakhi is saying that she has not been able to make a reel on the song Jhoome Jo Pathan from the film Pathan because of her mother’s illness, but she will still try to make a reel for Shahrukh.

Rakhi has told in the video that her mother’s condition is critical and hence she is unable to shoot the video. Rakhi then looks towards the hospital and asks her mother to bless her. He said that Pathan is a super hit. Mother, bless Pathan, bless Shahrukh that his film becomes a superhit. However, social media users have also become angry over this act of Rakhi. Many people commented to criticize Rakhi.

Users trolled Rakhi on this and said that she is doing drama again. A user asked- Did Shahrukh ask to do this? The drama of this woman is so hard to digest. It is not the fault of the trollers, the product itself is bad. Now she wants to make a reel but is afraid of what people will say that her mother is in coma and that is what she is doing so has come up with another drama.

A user slammed him for dragging his mother into this. User wrote, I think it needs a doctor for treatment, overacting shop. She is using her mother’s name to come in the limelight.