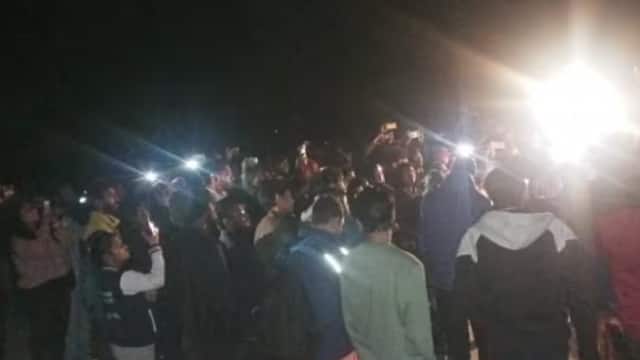 JNU BBC Documentary Screening: The controversy over the BBC documentary does not seem to stop. Now ruckus is going on in JNU campus located in Delhi regarding the documentary. Jawaharlal Nehru University students on Tuesday announced a screening of a BBC documentary on Prime Minister Narendra Modi. JNU Students’ Union power was allegedly cut off for showing a controversial documentary outside the JNU Students’ Union office even after the Jawaharlal Nehru administration refused. After this, a group of students watched the controversial documentary film on their mobiles in the presence of representatives of student organizations. Along with this, claims of stone pelting are also being made. There has been stone pelting between ABVP and Leftwing students. Along with this, the internet has also been closed.

The JNU administration had banned its showing a day before. The JNU Students’ Union could not attend the screening of the controversial BBC documentary even as they arranged to watch the film together on their mobile phones. Students had gathered near the JNUSU office for the screening but there was neither electricity nor internet. They used mobile torches and shared the documentaries through various means on each other’s mobiles to watch together.

The Jawaharlal Nehru University (JNU) administration said in an advisory on Monday that the Sangh had not taken its permission for the event and it should be canceled as it could lead to “disturbance of peace and harmony”. It may be noted that SFI and NSUI have talked about showing this documentary in various universities of the country. Student organization AISA has also written a letter to the JNU administration and asked under what rule they are refusing to show this documentary.