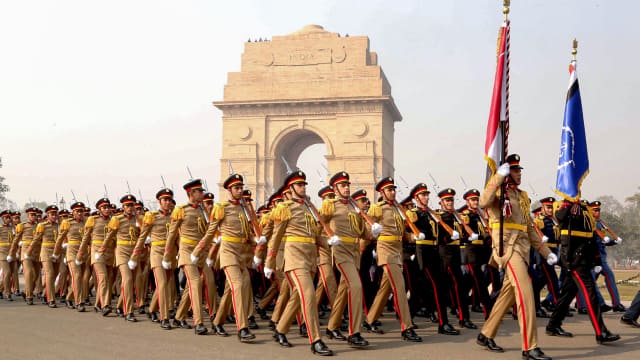 Republic Day Celebration 20023: Today India will celebrate its 74th Republic Day. President Draupadi Murmu will unfurl the flag on Kartvay Path. After this a grand parade will be organized. It will give a glimpse of the country’s progress in various fields. Defense material manufactured in the country is being specially displayed. The President of Egypt, His Excellency Abdel Fattah El-Sisi, will be the chief guest of the parade. Agniveer will also be included in the marching squad of the parade. According to the Defense Ministry, the Republic Day parade will begin at 10.30 am. It will showcase a unique blend of military prowess and cultural diversity of the country. This parade will reflect the growing indigenous capabilities of the country, women power and the emergence of ‘New India’.

The parade ceremony will begin with Prime Minister Narendra Modi visiting the National War Memorial. He will lead the nation in paying homage to the martyred soldiers by laying a wreath. Thereafter, the Prime Minister and other dignitaries will come to the Saluting Platform on the duty path to view the parade.

As per tradition, the national flag will be unfurled followed by the national anthem with a 21-gun salute. The 21-gun salute will be accompanied by a 105 mm Indian field gun. It will replace the vintage 25 pounder gun, reflecting the growing ‘self-reliance’ in defence. Four Mi-17 1V/V5 helicopters of 105 Helicopter Unit will shower flowers on the spectators present on the duty path.

Indian Navy Marching Squad
The marching contingent of the Indian Navy will comprise 144 young sailors, which will be led by Lieutenant Commander Disha Amruth. For the first time, the marching contingent comprises three women and six Agniveers. This will be followed by the tableau of the Navy, which is centered on the theme of ‘Indian Navy- ‘War Ready, Reliable, Harmonious and Secure Future’. It will showcase the Indian Navy’s multi-dimensional capabilities, Nari Shakti and key indigenously designed and built assets under ‘Atmanirbhar Bharat’.

The front portion of the tableau will depict the women crew of Dornier aircraft, highlighting the surveillance flights of the women crew completed last year. The ‘Make in India’ initiative of the Navy will be displayed in the main part of the tableau. There will be a model of the new indigenous Nilgiri class ship with a Dhruv helicopter to deploy marine commandos. Models of indigenous Kalvari class submarines will be displayed on both sides. The rear side of the tableau will display models of autonomous unmanned systems being developed indigenously under the iDEX-SPRINT Challenge.

Indian Air Force Marching Squad
The marching contingent of the Indian Air Force will comprise 144 Air Force personnel and four officers, which will be led by Squadron Leader Sindhu Reddy. Centered on the theme ‘The Indian Air Force’s Power Beyond Borders’, the Air Force tableau featured a rotating globe showcasing the extended reach of the Indian Air Force, through which it provides humanitarian assistance across borders as well as exercises with friendly countries. able to do will also be displayed. It will also showcase Light Combat Aircraft Tejas Mark-II, Light Combat Helicopter ‘Prachanda’, Airborne Early Warning and Control Aircraft Netra and C-295 transport aircraft. The tableau will also display a contingent of Garuda in battle dress with laser designation equipment and specialist weapons.