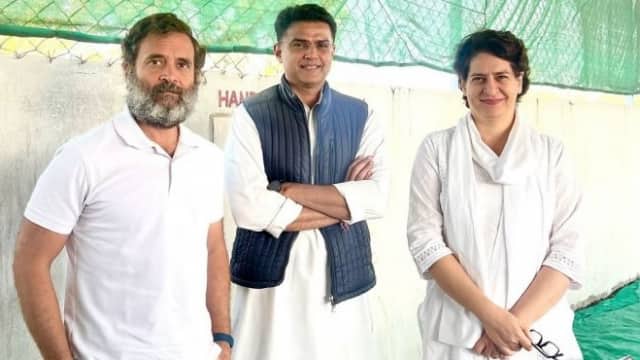 Former deputy CM Sachin Pilot of Rajasthan was asked a question that he would have the support of Rahul Gandhi and Priyanka Gandhi to which he replied, “Whoever believes in the constitution, the ideology of the Congress in this country, all of them. There is the support of Rahul Gandhi and Priyanka Gandhi. Speaking to India Today, Pilot said that all those who want the interest of this party and want to strengthen the party in the future, Rahul Gandhi, Priyanka Gandhi, Sonia Gandhi ji, Kharge ji’s support mixed It is wrong to say that one has support and the other does not.

What did Pilot say about Rahul’s net worth?
At the same time, on Rahul Gandhi’s asset statement, Sachin Pilot said that this is his assessment and it is correct because all people are assets for the party. Everyone works together. He said it is my priority for our government to repeat itself in Rajasthan. There are elections next year and there is not much time. If we work together, we can form the government. Congressional governments have also repeated this in the past. After five years, the government has to change, things have to change and we can do that. There’s no arguing with anyone. Since the time the yatra is going on, we support the yatra. Yatra is coming to Rajasthan and it is very important for us people as there is an election next year.

A consensus was reached between the committee and the Gurjar community
To resolve the pending demands of the Gujjar community before Congress leader Rahul Gandhi’s ‘Bharat Jodo Yatra’ enters Rajasthan, talks took place on Thursday between a three-member committee of ministers composed by the state government and a delegation from the Gujjar community. Agreed. After this, the community leaders announced that they would call off their protest. After the meeting, Sports Minister Ashok Chandna and Gujjar leader Vijay Bainsla announced the end of the protest at a press conference. Speaking to reporters, Minister Chandna said that “more than 90 percent of the issues raised by the Gujjar delegation have been resolved. The government and especially the Prime Minister showed positive attitude towards resolving the issues.”