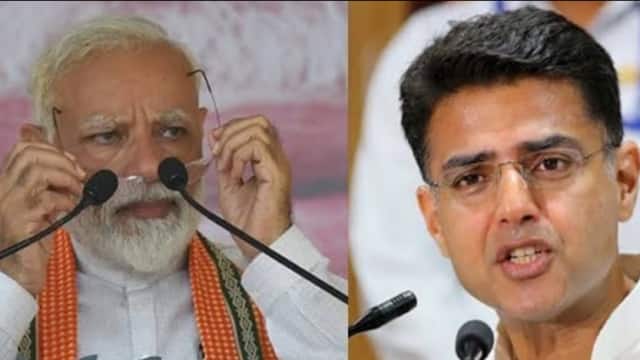 PM Modi In Rajasthan: Before the assembly elections in Rajasthan, PM Modi is coming on Rajasthan tour. He will participate in the Lord Devnarayan birth anniversary organized in Bhilwara district on January 28. PM Modi will participate in the program organized on the 1111th incarnation day of Gurjar community’s idol Shridevnarayanji in Bhilwara. Sridevnarayanji is considered to be an incarnation of Lord Vishnu. PM Modi’s visit to Bhilwara also has political significance. BJP strategists have made plans for PM Modi’s visit to cut off Sachin Pilot. Modi’s visit is being seen as an exercise to win over the Gujjar vote bank. Sachin Pilot is considered to have a hold on the Gurjar vote bank in Rajasthan. BJP wants the Gujjar vote bank to be mobilized before the elections. Before the assembly elections to be held in Rajasthan this year, the political discussion about PM Modi’s visit to the Gujjar-dominated area is intense. Political analysts believe that this visit of PM Modi is a part of the exercise of taking political mileage. Gurjar community has a huge vote bank in Rajasthan.

BJP’s attempt to turn Gujjars towards itself

The Gurjar community is angry with the BJP because during the tenure of Vasundhara Raje, about 73 Gurjars were killed in police firing. The Congress has been repeatedly besieging the BJP by raising the issue of Gujjar reservation. Gurjar Samaj is considered to be the traditional vote bank of Congress. BJP’s strategy is to connect Gurjar community with the party. For this, BJP has made a plan for PM Modi’s visit to Bhilwara on the 1111th incarnation day of Lord Sridevnarayanji, the deity of Gurjar community. Let us tell you, in Dausa, Sawai Madhopur, Dhaulpur, Alwar and some parts of Jaipur in eastern Rajasthan, Gujjar community is in large numbers. In these districts, Sachin Pilot is considered to have an impact on his society. A huge crowd had gathered for Rahul Gandhi’s Bharat Jodo Yatra in eastern Rajasthan. The main reason behind this is considered to be Sachin Pilot. During the yatra in Dausa district, the traditional stronghold of the Pilot family, there was a huge crowd. In Dausa itself, slogans were raised in front of Rahul Gandhi to make Sachin Pilot the CM.

PM Modi can announce the corridor

The way the Central Government has made grand religious corridors in Varanasi, Ayodhya and Ujjain, a similar corridor will be built in the name of Lord Devnarayan at his manifestation place Malaseri Dungri in Asind, Bhilwara. The Ministry of Culture of the Central Government is making preparations for this. Prime Minister Narendra Modi is coming here on January 28 on the 1111th manifestation of Lord Devnarayan. He can announce this corridor in his meeting. The BJP currently has 24 out of 25 MPs in Rajasthan, one of whom is from the Gujjar community. Sawaimadhopur- Tons MP Sukhbir Singh Jaunapuria. Whereas out of 200 seats in the Vidhan Sabha, there is not a single MLA from the Gujjar community who has won on a BJP ticket. In such a situation, the BJP is trying to win over the Gujjar community by building the Devnarayan Corridor in Asind. The most recognition of Lord Devnarayan is in the Gurjar community, but he is also worshiped in other caste-communities of farmers and cattle herders. In the assembly elections 2018, BJP’s sweep was cleared from East Rajasthan.