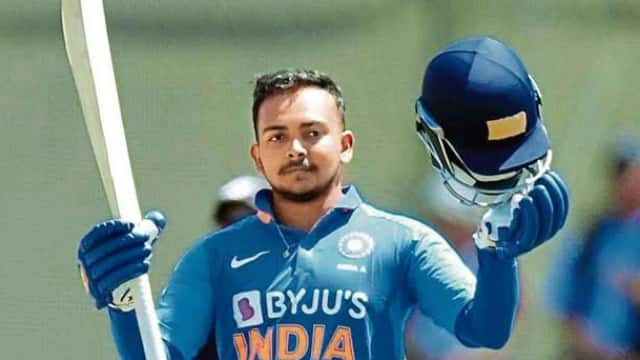 After sweeping New Zealand 3-0 in the ODI series, India will now look to thrash the visitors in the T20I series as well. Senior players like Rohit Sharma and Virat Kohli have been rested after the ODI series and Hardik Pandya will lead the T20 team. The Board of Control for Cricket in India (BCCI) has already announced the T20 team against New Zealand. In this team, an explosive batsman like Prithvi Shaw has also been selected after a long time, but looking at the squad, it does not seem that he will get a chance in the playing eleven.

Whenever the Indian team used to play a series, the fans often kept their eyes on the name of Prithvi Shaw in the T20 squad. Actually, Shaw was scoring runs in domestic cricket for a long time, but still he was constantly being ignored. When the fans did not see Shaw’s name in the squad, they used to vent their anger on the BCCI on social media. Now even after Shaw’s return to the team, the fans may have to wait to see him playing in the blue jersey.

Actually, Prithvi Shaw is an opener and looking at the current squad, it does not seem that he will be able to make it to the first 11 players. Apart from Prithvi Shaw, this squad has Shubman Gill, Ishaan Kishan, Rituraj Gaikwad and Rahul Tripathi as openers. Hardik Pandya will go against New Zealand with the same two openers who played against Sri Lanka.

Yes, only the pair of Ishaan Kishan and Shubman Gill can be seen opening the innings in the first T20 against New Zealand. After the Sri Lanka T20 series, there was definitely a threat to Gill’s place as he could not show anything amazing in the shortest format of cricket. In the three-match T20I series against Sri Lanka, he scored only 58 runs with the bat, but the runs he scored in the next 6 ODIs can cement his place. Gill hit 207 runs against Sri Lanka at an average of 69, while against New Zealand he scored the highest 360 runs at an average of 180. During this, he also scored a double century. In such a situation, it seems difficult for Shaw to play as an opener.

Talking about number three, in the last match against Sri Lanka, Rahul Tripathi has won the trust of the captain and coach by playing a brilliant innings. In such a situation, it is difficult for Shaw to play there as well. His place below number three is not made anyway, in such a situation, Shaw may have to wait a long time to make a place in the playing XI.