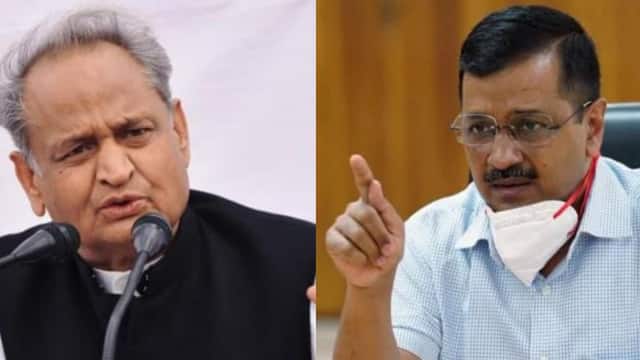 Assembly elections in Rajasthan are due in late 2023. Rajasthan Congress in-charge Sukhjinder Singh Randhawa has prepared a plan to stop Kejriwal’s Aam Aadmi Party. State Congress has focused on the canal sector. District level programs will be organized in Sriganganagar and Hanumangarh districts. CM Ashok Gehlot will reach Suratgarh in Sriganganagar on 19 January. On January 20, Congress workers will feel the pulse of the people by addressing the conference. CM Gehlot’s visit to Sriganganagar is being seen as a way to curb Kejriwal’s influence in the canal area. State in-charge Sukhjinder Singh Randhawa and PCC Chief Govind Singh Dotasara will also be present. State in-charge Randhawa himself will go to every assembly constituency of canal area. According to sources, state in-charge Randhawa is studying the record of win-loss last time. It is discussed that if there is a cabinet reshuffle, the canal sector will get priority. Congress has to compete with broom and lotus in canal area. Let us tell you that there is a sizeable population of Sikh community in the canal area of ​​the state. Kejriwal’s focus is also more in the canal sector. In such a situation, state in-charge Sukhjinder Singh Randhawa himself will go among the Sikh community and inform about the plans of the Gehlot government.

Taking lessons from Gujarat elections, Rajasthan Congress has made a plan to stop Kejriwal’s burglary. The party has intensified its focus on areas under Kejriwal’s influence. Kejriwal has influence in the canal sector of the state. Because the canal area of ​​two districts of Rajasthan Sri Ganganagar and Hanumangarh shares border with Punjab. Two districts of Punjab, Fazilka and Muktsar share border with Rajasthan. The maximum border with Punjab is Sri Ganganagar and the minimum border is Hanumangarh. The district headquarters near the Punjab border are Sri Ganganagar and the far district headquarters are Hanumangarh. Aam Aadmi Party’s influence is believed to be there in these areas. In the assembly elections 2018, the Congress had achieved spectacular success in both the districts. This time the Congress will have to compete with the BJP as well as the Aam Aadmi Party. Let us tell you that the Aam Aadmi Party had caused a lot of damage to the Congress in the Gujarat elections. About 13 percent of the votes were taken. The benefit of which was to the BJP and the loss to the Congress. CM Gehlot’s visit to Sriganganagar is being seen as a way to curb Kejriwal’s influence in the canal area.

Congress competes with BJP as well as AAP

The main contest of the Congress in Rajasthan is being considered with the BJP. But this time there can be a reversal in the assembly elections. Congress has to compete with BJP as well as Hanuman Beniwal’s party RALP, Bahujan Samaj Party and Owaisi’s party. RLP has influence in western Rajasthan. The ILP can damage the Congress by making inroads in the Jat community. While Bahujan Samaj Party’s influence is in the districts of eastern Rajasthan. In the assembly elections 2018, the BSP’s MLAs won from East Rajasthan only. This time Owaisi’s party will also contest the assembly elections. Can dent the Muslim vote bank. CM Gehlot knows this, so the preparations for the elections have already started.