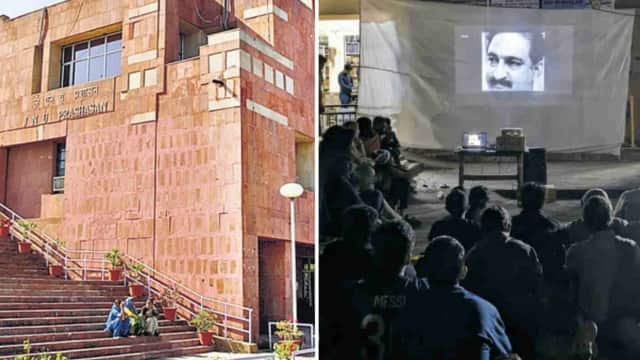 BBC Documentary Row: The controversy over the BBC documentary on Prime Minister Narendra Modi is not taking its name. The Government of India has already given instructions to block and stop the broadcast of videos and clips related to this film on YouTube and Twitter. But, the politics regarding this film has intensified in educational institutions from Delhi to Hyderabad. The screening of the film is to be held tonight at JNU University, which has been banned by the administration saying that it may disturb the peace. On the other hand, despite the instructions of the Center, the screening of this controversial film was done in the University of Hyderabad campus. In clarification, the student union is saying that it has not done anything wrong, on the other hand, on the complaint of ABVP, the administration has said to take action.

Coming to JNU first, a group of students have released a pamphlet for the screening of the documentary “India: The Modi Question”. In which it has been told that the screening of the film will be shown today i.e. on January 24, 2023 at 9:00 pm. The administration says that no permission was taken from them regarding this event. Such unauthorized activity may disturb the peace and harmony of the University campus.

The administration issued a note saying, “The students or persons concerned are strongly advised to cancel the proposed program immediately. Non-compliance of instructions may invite strict disciplinary action as per university rules.” ”

The BBC documentary titled “India: The Modi Question” traces the events following the 2002 Gujarat riots and questions Prime Minister Narendra Modi’s handling of the riots as the state’s chief minister. Meanwhile, the government called the short film a “propaganda piece” and issued instructions to block several YouTube videos and Twitter posts allegedly sharing links to it.

Film watched at Hyderabad University
Meanwhile, days after the Center stopped the airing of a BBC documentary on Prime Minister Narendra Modi, its screening was witnessed on the University of Hyderabad campus. The Akhil Bharatiya Vidyarthi Parishad (ABVP) on Monday lodged a complaint with the administration officials, alleging that students watched a BBC documentary on the campus.

In the matter, the university administration said that they are waiting for a report based on the complaint received. He said that the report of the security department is awaited and further action will be taken accordingly. On the other hand, the students union has denied doing anything ‘illegal or wrong’. At the same time, according to the Gachibowli police, no complaint has been received regarding the screening so far.