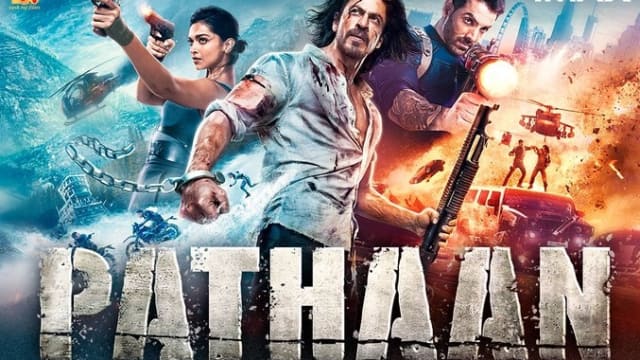 Shah Rukh Khan’s comeback film Pathan has lost its magic. The film was awaited for a long time and with the release of the film, the audience showered a lot of love. On the one hand, where Shah Rukh looted a lot of accolades, the glamor and style of Deepika Padukone was also whistle-blowing. Apart from Deepika, John Abraham proved to be strong in the role of Villain. At the same time, Salman Khan’s cameo in the film added to the charm. After all this, we tell you in this report how much the film was able to collect at the box office on the first day.

How much was Pathan’s collection
A lot of craze was being seen in the audience regarding Pathan. Not only Shah Rukh Khan’s fans but Salman Khan’s fans were also excited about the film. Fans are very happy after the release of the film. On the one hand, where the film has received good reviews on critics and social media, on the other hand, there has been a bang at the box office as well. According to the report of KoiMoi, the film has collected around Rs 100 crore worldwide on the first day. At the same time, the collection of all languages ​​in India has been Rs 53.25 crore. While only the Hindi version of the film earned 51.60 crores. Let us know that these are early trends and the official figures may be slightly higher or lower.

How is Pathan?
Talking about its short review, Pathan is a very spicy film. The film has action, dance, comedy, boldness and romance. The film has everything that you will enjoy. However, the script of the film is a bit lackluster and proves to be weak at many places. The first half of the film is good and the second half proves to be weak and long. One of the funniest scenes in the film includes Salman Khan’s cameo. At the same time, the audience gets this fun twice. Overall, you can enjoy Pathan.

shahrukh khan upcoming projects
Shahrukh’s most awaited and comeback film Pathan has been released. It is expected that this film will create history at the box office. After Pathan, Shah Rukh Khan will be seen in the film Danki Aur Jawan. Shah Rukh Khan is paired opposite Taapsee Pannu in Rajkumar Hirani’s Danky. The film will hit the theaters on 22 December 2023. Apart from these two films, Shah Rukh will also be seen in the film Jawan with director Atlee. Shahrukh Khan’s Jawan will release on June 2, 2023 in Hindi as well as Tamil, Telugu, Malayalam and Kannada.